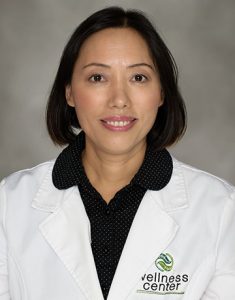 Jingwei (Jenni) Jia was born in China, the birthplace of acupuncture and TCM (Traditional Chinese Medicine). In 1990, Jenni began studies at Beijing Broadcast Institute and earned a Bachelor of Science in both Education and Journalism in 1995. After four years of teaching English, she moved to the United States.

Although Jenni always intended to work in a helping profession, alternative medicine is her priority. In 2005, she started to study acupuncture. In addition to being an apprentice and studying acupuncture in Beijing, China, in 2007—Jenni’s clinical experience from Guang An Men TCM Hospital and TCM-Western Integrative Hospital were invaluable to understanding and practicing acupuncture. In February 2008 after three years of study, she graduated with top honors from the Columbus, Ohio American Institute of Alternative Medicine’s Master Level Acupuncture Program. Certified by NCCAOM (National Certification Commission of Acupuncture and Oriental Medicine), she is licensed by The State Medical Board of Ohio to practice acupuncture. She is also a Licensed Massage Therapist in Ohio, specializing in Tuina (acupressure).

With conviction in this treatment modality, Jenni believes that acupuncture is effective with all types of pain as well as other conditions. As an excellent first treatment choice that can be used to avoid surgery—acupuncture gives people hope in being well again, when they thought they were out of options. As one of a few TCM Acupuncturists in the area, Jenni is excited to offer acupuncture to Findlay and NW Ohio communities.